The San Gabriel Cemetery and its next-door neighbor, The Church of Our Saviour, share an early common history. Both began on land originally donated by Benjamin Davis Wilson. Part of the cemetery property was donated by Henry R. Messenger, first Rector of The Church of Our Saviour. Also, church lore tells of Dr. Messenger permitting burials in the property to the west of the church; however, no records of these burials can be found.

The Founding of San Gabriel Cemetery

The 20th Century and Beyond 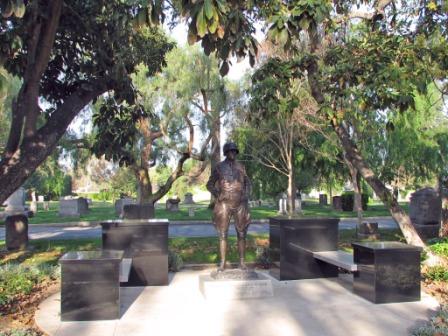 Perhaps the most well-known burials in the San Gabriel Cemetery are those of the Wilson and Patton families. The Wilson/Patton burial plot is marked by marble obelisk measuring approximately 25 feet in height and inscribed with the Wilson name. Surrounding the obelisk are the graves of various family members, including Benjamin D. Wilson, who died in 1878, and Margaret Hereford Wilson, who died in 1899. Their daughter, “Little Maggie” is remembered with a small and distinctive monument, and son. John is remembered by a small obelisk. Margaret Wilson’s sister, Esther Madeira Hereford, is also buried here.

Benjamin Davis Wilson stands out in the history of the San Gabriel Valley as well as in the history of the San Gabriel Cemetery. His involvement with the Episcopal Church is critical to the cemetery history. It was Wilson property and largely Wilson enterprise that formed its basis. Wilson entered Los Angeles politics in 1849. He became the first clerk of Los Angeles County and then mayor in 1851, and was appointed and Indian Agent by President Millard Fillmore in 1853. He was elected state senator in 1855.

Wilson built a home on the property (near the present San Marino intersection of Euston Road and Patton Way) and named it Lake Vineyard. There he began farming and wine production on these lands. He also opened a retail wine outlet in San Francisco. In 1876, he purchased 250 acres of land upon which he started the city of Alhambra.

Mr. Mui served as Mayor of San Gabriel in 2005. His beautiful bronze marker portrays his pride of heritage and his love for his adopted homeland.

Richard H. Lacy was once mayor of San Marino, and his wife, Maude, was an active supporter of the San Marino schools. In 1926, Lacy Park was named after them. There had previously been a small lake in the center of the area, named Wilson Lake, but it was filled in in 1926.

William Money, one of the most colorful characters resting in the San Gabriel Cemetery, is buried in the Mulock family plot because he was credited with having saved the life of young Dan Mulock at one time in San Gabriel after Mulock was gored by a wild boar.

According to an article that appeared in the Los Angeles Times, Money was regarded by his family as having great mystical power. He claimed that Jesus had told him to head west from New York. He also claimed that he could imitate Christ and rise from the dead after three days in the tomb. According to the Times, Angelenos demanded that Money prove his claim. Money did get into a pine box, the lid was nailed shut, and he was lowered into the ground. Money lost his nerve and demanded to be let out before the burial was completed.

In addition to claims of mystical powers, Money also presented himself as a medical doctor, claiming to have treated 5,000 patients, some of whom came to see him during an 1863 smallpox epidemic.

Located just to the east in a row of avocado trees separating church and cemetery property is a life-sized bronze statue of General George S. Patton in battle dress. The statue, designed and crafted by Len McCann in 1984 was commissioned by members of The Church of Our Saviour to honor Patton’s service in World War II and to commemorate his being part of the parish.

The grave of Corporal Anderson is marked by a life-sized statue of a Civil War soldier. Anderson was a Union veteran who participated in Sherman’s march to Atlanta.

Dr. Barlow came to California in 1897 after contracting tuberculosis. He established the Barlow Sanatorium for indigent tuberculosis patients of Los Angeles County. It exists today as Barlow Respiratory Hospital. He also established the Barlow Medical Library at Los Angeles to aid people of limited means to obtain a medical education. Barlow practiced medicine for 40 years. He was the former vice president of the American Medical Association, a former Dean of the University of California Medical College, and served as president of the Los Angeles County Medical Association and the National and California Tuberculosis Association. He was also one of the organizers of the Los Angeles Philharmonic Orchestra.

Henry Mather Greene was born in 1870 in Brighton, Ohio. Greene, with his brother, Charles Sumner, was one of the pre-eminent architects of the Arts and Crafts movement. Henry and Charles came to California in 1893 at the request of their parents, who had moved to the little country town of Pasadena. From this location, they went on to design some of the most well known houses of the day, of which, the Gamble House in Pasadena, California is perhaps the best-known example. Henry Mather is buried next to his wife, Emeline Dart. Their tombstones are bordered by a carved vine done in the Craftsman tradition.

The Titus family plot is distinguished by a monument featuring a draped and grieving female figure holding a wreath. Luther Titus served on the Board of San Gabriel Cemetery at its time of incorporation in 1874. Mr. Titus was an area pioneer, and inventor whose inventions include a ladder on wheels, hand shears that allow one to cut and pick fruit with one hand, and a machine for molding cement canals that improved irrigation.

Mr. Clapp was a First Sergeant in the 2nd Ohio Cavalry. He was posthumously awarded the Congressional Medal of Honor for capture of the battle flag of the 8th Florida infantry at Sailors Creek, Virginia in April 1865.

Born Peter Ceragioli, Pete Jolly was a studio and jazz pianist, with a jazz recording career spanning 45 years. He was nominated for a Grammy Award in 1963 for his recording of “Little Bird.” As a studio musician, he played on the soundtracks of many films and TV shows, including : Butch Cassidy and the Sundance Kid,” “I Spy,” and “Get Smart.”

Mr. Chapman came to California in the late 1850’s He became city attorney of Los Angeles in 1863. Mr. Chapman, who purchased Rancho San Rafael at a foreclosure sale in 1860 for the $58,750 and acquired 9,400 acres of Rancho Santiago with his law partner, Andrew Glassell, is credited with being one of the developers of the southern California cities of Orange and Glendale.

Richard Knerr, who gave the company he and a friend started in a garage the altogether appropriate name Wham-O, then marketed products that for two decades virtually defined frivolity in postwar America, from the Hula Hoop to the Frisbee to the SuperBall, died on Monday at his home in Arcadia, Calif. He was 82.

The cause was complications of a stroke, said Stefan Pollack, a Wham-O spokesman.

Mr. Knerr (pronounced nur) and Arthur Melin had a talent for turning seemingly quirky ideas into national passions. In 1958, their Hula Hoop invigorated members of a rock ’n’ roll generation eager to shake their hips, if only to keep the precarious plastic ring from dropping to their feet.

The marketplace shook almost as much as derrières. Richard A. Johnson, in his book “American Fads” (William Morrow, 1985), said the plastic hoop “remains the standard against which all national crazes are measured.”

In the first year, Wham-O sold as many as 40 million hoops; by 1960, 100 million, a mark no other toy had ever reached. After too many households had two or three of the hoops, the fad evaporated, leaving Wham-O marooned on a mountain of tubular plastic. Total profit: only $10,000, a result of business inexperience and millions of unsold hoops.